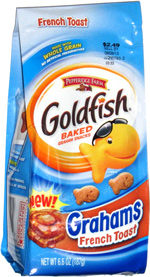 Taste test: This version of Goldfish caught our attention because what makes more sense than French toast shaped like fish? The fish had a graham cracker color, just like the ones pictured on the bag (the ones at the bottom, not the one wearing the sunglasses), but they had lots of white sugary stuff on the surfaces, unlike the ones on the bag.

We crunched in to find that the fish were crisp with a good soft crunch, and they tasted like sugary graham crackers with some cinnamon, sort of similar to French toast. Most of our snackers enjoyed the taste, though a few of the fans found them to be too sweet. The only major downside was that lots and lots of sugar ended up on the fingertips. A napkin could be in order, or, if circumstances allow, you could pour the Goldfish directly from the bag into your mouth. This was only the second snack we've tried that claimed to taste like French toast; the other was from Burger King and not shaped like fish.

From the package: “Nothing beats playing outside in the sunshine and getting a little color! — Xtreme” ... “made with whole-grain no artificial preservatives” ... “baked graham snacks”

This snack was discovered by Jeremy at Market Basket. Review published May 2013.