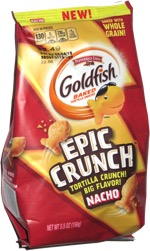 Taste test: This version of Goldfish promised to be crunchier and bigger than the standard Goldfish, with the major change in composition being that they were made primarily from corn instead of wheat. Each piece had a similar shape to regular Goldfish, but was about 50% bigger and quite noticeably thicker, with a yellowish beige surface featuring some orange seasoning.

I crunched in to find a good strong crunch, stronger than we're used to from Goldfish and clearly a corn-like feel, with a pretty nice taste with a slightly spicy nacho cheese.

Out of curiosity, I checked the Ingredients to see whether this corn-based snack described as "Baked tortilla snacks" was gluten free, and was surprised to find that it actually did contain Wheat — likely considerably less of it than the Whole Grain Yellow Corn Flour that was listed first, but nonetheless, it's in there. Given the high demand for gluten-free foods by some folks, the decision to create a corn-based Goldfish but make it with just a little but of wheat seemed mystifying.

This snack was discovered by Jeremy at Hannaford. Review published .