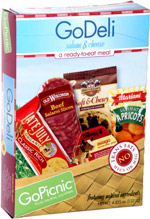 The salami slices were packed in an offset stack inside a shrink-wrapped package. I couldn't get the package open with just my hands, but I was able to with the help of the plastic knife. When I got it open, it looked like these was an oily coating on the whole outside of the stack. I took the top piece and and ate it with a cracker, and it had a super-greasy taste and an equally greasy aftertaste. Just awful. Most of the other salami pieces turned out to be not quite as bad, because only the exposed surfaces were coated in oil; the parts that touched other slices were not oily. I ate some of the slices on crackers coated with the cheese, and that was OK, but still not great because that greasy taste re-emerged a few times. I had some crackers with just the cheese, which was better.

I ate the apricots right after finishing with the crackers, salami and cheese (leaving 3 slices of salami uneaten), and I really didn't think that the apricot taste was good following those other items.

This snack was contributed to Taquitos.net by the manufacturer. Review published March 2009.