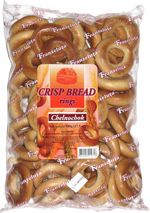 Taste test: When we initiated this review, we had reviewed more than 6300 snacks from 67 different countries, but none from Moldova. So finally, this was our very first snack from the nation of Moldova. The bag was chock-filled with what looked like mini-bagels, except with extra-large holes, reasonably thick and a 2 inches in diameter, with various shades of beige reinforcing the bagel look. But that was just the appearance, as the rings were by no means bendable or soft.

We crunched in to find a solid, hard texture, not as hard as a thick sourdough pretzel, but just a level below that. We were impressed that nearly every piece in the bag was unbroken. They had a hint of pretzel in them, but it was more of a bread-like flavor, though with a hint of sweetness as well. Just one piece took a while to eat and was fairly filling, and there were lots of them in the bag.

This snack was discovered by Jeremy at Bazaar on Cambridge Street. Review published July 2014.