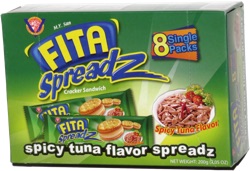 Taste test: This box contained eight individual packages with three cracker sandwiches in each. The crackers were round and looked similar to Ritz. Because it was so unusual to see tuna as the sandwich filling for this type of product (cheese and peanut butter are far more common), I checked the ingredients to see if the filling actually contained tuna, figuring that it indeed would. Not only did it not contain actual tuna — it didn't contain fish of any type!

The taste was reasonably like tuna, even knowing that it actually wasn't. The was no spice that I could notice, at least initially, but there was a noticeable heat that arrived in the aftertaste. It was a tough task to get any other snackers to even try these, but really they weren't all that bad.

Smell test: Kind of like tuna, and not even in a bad way. Not bad.