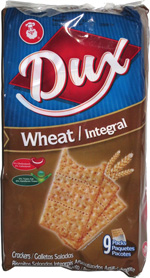 Taste test: This package of crackers was all about various multiples of three. First, the main outer package contained nine individually wrapper packs. Each of those contained three large rectangular crackers. And each large cracker was perforated to be divided into three smaller rectangular crackers. The threes didn't even stop there! Each of the smaller crackers had a 6x3 grid of holes.

Math part over! Let's talk about eating the crackers. They had a somewhat crumbly feel with a soft crunch, and they did make a lot of crumbs. There was a good wheat taste, probably less sweet and also less salty than some of the tastier crackers like Wheat Thins and Wheatables, but it was still pretty good. I had some with sliced Muenster cheese, which was a tasty combo.