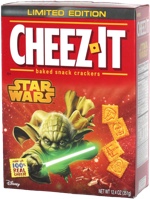 Taste test: When we last reviewed a Star Wars edition of Cheez-Its, we were not impressed. For that one, released in conjunction with Episode III of the popular movie series, they designed a special Star Wars box and proceeded to fill it with a bag of entirely ordinary Cheez-Its — nothing Star Wars about them. So after spending $113 million to make the movie, they got cheap when it came to designing a respectable licensed Cheez-It? Lame.

Because the folks at Disney/Lucasfilm obviously read our review (or, just maybe, coincidentally) they decided to correct that egregious mistake when they planned some limited-edition Cheez-Its to hit stores before Episode VII (The Force Awakens) hits theaters. This time, the cheese crackers still had squarish shapes, but instead of plain surfaces, they had an assortment of six different Star Wars images pressed into the top surfaces (with regular bottom sides). The shapes of C-3PO, R2-D2, the Millennium Falcon, Chewbacca, a stormtrooper's helmet and an X-wing fighter were all easily recognizable and looked good. Some of the details were muddied by the bits of salt on the cheese surface, but we'll take that loss in appearance in exchange for the salt that helps make Cheez-Its so delicious.

They tasted as expected, with lots of cheese and lots of salt like regular Cheez-Its, with a somewhat crispier feel thanks to the Star Wars shapes adding a little more structure to the surfaces.

There were some odd things too. The box had Yoda on one side and Darth Vader on the other, and neither of them were actually on any of the Cheez-Its inside. There was no specific mention of Episode VII anywhere. One side of the box explained details about about the six shapes (and somehow they found ones without salt in critical places for their pictures) but all of it was very generic, with nothing particular to the latest movie.