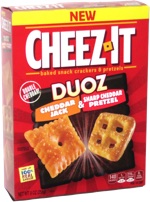 Taste test: This version of Cheez-It's Duoz followed on the path of the Caramel Popcorn & Cheddar ones by providing one kind of Cheez-Its and something else, rather than two flavors of Cheez-Its.

In this case, it was Cheddar Jack Cheez-Its and small, 2x2 grid pretzels, each a bit smaller than a single Cheez-It cracker. The pretzels didn't look cheddary — they looked like regular pretzels. I grabbed a handful that included some of each kind and crunched in to find that there was indeed lots of cheddar flavor that seemed to be coming from both elements. I did notice a difference from the standard Cheez-It taste. The pretzels weren't particularly crunchy as pretzel go, but there was still a contrast in texture between the two. Pretty good.

From the package: “You'll be tasting double with 2X the cheddar”

This snack was discovered by Jeremy at Wegmans. Review published February 2018.