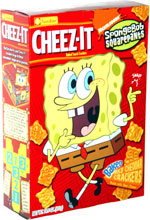 Taste test: This version of Cheez-Its had a generally trapezoidal shape, with wiggly SpongeBob-style edges and Spongebob's face stamped into one side of the Cheez-It.

There were several different SpongeBob expressions among the Cheez-Its in the box. The thickness of the pieces varied a bit but was generally a bit thinner than regular square Cheez-Its. You could see pieces of salt on each of the pieces. As with every other kind of Cheez-Its we've tried, our tasters liked these a lot. It seems you can't go wrong with Cheez-Its.

From the package: “Has Plankton unleashed his most diabolical plan yet? Help SpongeBob or join forces with the tiny terror to see who can reach the Krusty Krab first!”

This snack was discovered by Jeremy at Market Basket. Review published July 2007.