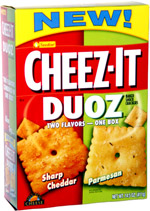 Taste test: This brand-new concept took two different kinds of Cheez-Its and combined them in one box.

It's kind of like what Doritos has done with its Collisions line of chips, which combine two different flavors of Doritos in one bag. The two kinds in this box could easily be distinguished by their different colors. The orange sharp cheddar ones were a bit tangier than your standard Cheez-Its, as they had some additional spices on them, so they were quite tasty on their own. The pale yellow parmesan ones were nice as well, with a tasty seasoning that was also fairly strong. I wasn't sure what to expect when I put one of each kind in my mouth at once, but it turned out to be a flavor explosion that combined the boldness of both flavors, loaded with lots of great Cheez-It taste. Nice job by the Cheez-Its folks with this combination.

Smell test: I think I can smell both cheddar and parmesan. Pretty good.

From the package: “Two flavors combined in one box!”