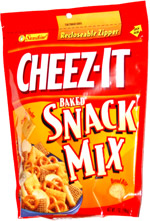 I found it kind of amusing that they used Chex in this, as this is a competitor to Chex Mix. And it turns out that they imiated Chex Mix in more ways than that, as the flavoring was very similar to the Worcestershire-like taste of the Traditional Chex Mix. The flavor was very good, and it went well with the very crisp bagel chips (though there seemed to be very few of them in the bag), pretzels and Chex. The Tater Twists were as real standout as the crunch texture was truly great with a nice taste as a bonus. The Cheez-Its themselves were almost an afterthought, as this mix would have succeeded just as well without them.

Smell test: Very mild, but kind of like the Worcestershire sauce that that they use in Chex Mix.

From the package: “Grab a handful of Cheez-It® Snack Mix the ready-to-go mix packed with tons of flavor and crunch ... the ultimate snacking satisfacion.”