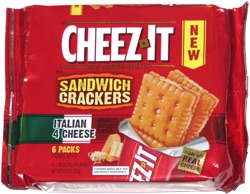 Taste test: We've eaten and reviewed many kinds of Cheez-Its, with all manners of shapes and flavors, but this is the very first time they've combined two of them into a sandwich.

A closer look inside the wrapper of the first packet revealed that the actual crackers had the same postage stamp-like notches around the edges as ordinary Cheez-Its. They were larger than normal Cheez-Its and had a 3x3 grid of holes, rather than just one in the center. The center hole was a bit bigger than the others, in some cases allowing a bit of filling to come through. The crackers had the signature orange Cheez-It color, and the cheese filling was kind of a peach color. (One odd thing: the individual wrappers did not look like the ones pictured on the outer package, with different graphics and made of clear plastic rather than foil.) I crunched in to find that the crackers had a brittle feel that said "Cheez-Its" to me. There was a good helping of cheese filling, with a strong mix of cheeses, and it all tasted quite good.

This snack was discovered by Jeremy at Stop & Shop. Review published July 2016.