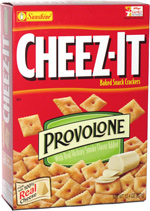 Taste test: These Cheez-Its had a much yellower color than the orange original flavor, with various shades of light yellow, plus some areas of browning on most pieces. Their shapes were the same as the original, with their sort of postage stamp-like edges, a hole in the center and generally a slightly puffy appearance. We crunched in to find a fairly mild provolone cheese flavor with some nice smokiness as well.

The funny thing about the packaging was that they put "Provolone" in huge type, with a hard-to-notice note beneath, in white-on-light-green type, much smaller, noting that there's also hickory smoke flavor. Many of our snackers were quite surprised by the smoke flavor, because they didn't even notice the mention of smoke on the box, and they found the smoke taste to be stronger than the provolone.

People generally these liked the taste, but there were some detractors as well, including some who were disappointed that the box promised provolone but delivered mostly smoke.

From the package: “With Real Hickory Smoke Flavor Added” ... “made with 100% Real Cheese”

This snack was discovered by Jeremy at Market Basket. Review published November 2014.