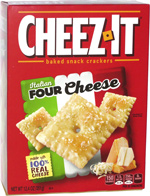 Taste test: One weird thing about "three cheese" and "four cheese" snacks is that sometimes the snack companies make little effort to actually identify the cheeses. Such was the case here, as they put "Four Cheese" in very big letters on the front of the box, but nowhere in any of the marketing copy did they specify what any of the four cheese were (though there was a picture of some cheeses). I checked the government-mandated ingredients list to look for clues, and although it did answer the question, there were actually five cheese listed: Monterey Jack, Romano, Parmesan, Mozzarella and Asiago. So why not call it Five Cheese? Which one were they trying to hide from?

I opened the box to find that the crackers had a fairly bright yellow color, quite different than the regular orange Cheez-Its, but color aside, the shapes were standard-issue Cheez-It. I grabbed a handful of crackers and crunched in to find a light crunch, standard Cheez-Its texture and lots of tasty cheese flavor, somewhat but not entirely different than what you would expect from regular Cheez-Its — they still had the essence of Cheez-Its, but just with a different mix of cheeses, more subtle in the cheese sense, but with some extra seasonings. When I was done eating, I noticed that there was a whole lot of whitish cheese powder on my fingertips.