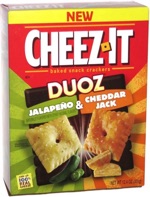 Taste test: This version of the two-flavors-one-box Cheez-It Duoz provided a good color contrast between the yellow Jalapeno ones and the orange Cheddar Jack ones. Other than the base color, there not much colored seasoning on either one, as the yellow ones had some green stuff, but less of it than it showed in the picture on the box.

I crunched in to find that the Jalapeno ones had just a bit of heat, but not a real jalapeno flavor. The Cheddar Jack ones didn't taste exactly like the original Cheez-Its, but the difference was far from vast. When I ate a bunch of both, it was a tasty combination, and it brought some extra heat in the aftertaste.

Smell test: Not strongly jalapeno-like nor cheddary. Kind of muddled.