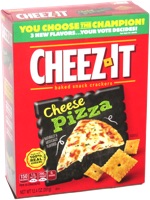 Taste test: Much like the Cheeseburger flavor of Cheez-Its, the pieces in this box generally looked pretty similar to the original, but the looks varied a lot from piece to piece, as some of the pieces had a noticeable smattering of darker seasoning.

I poured a whole bunch of pieces onto a plate and tried them to find that the ones without the extra seasoning tasted pretty much like regular Cheez-Its, while the ones with lots of seasoning had a noticeable zesty mix of spices, and the ones that looked somewhere in between tasted somewhere in between. The spices were zesty, reasonably tomato-like and went well with the Cheez-Its taste, but the combination didn't really say "pizza" to me. Maybe because they generally don't use cheddar on pizza? Anyway the taste was good, just not particularly pizza-like.

Smell test: Can smell some tomato, but it didn't smell really like pizza.

From the package: “You choose the champion! 3 new flavors ... your vote decides!”