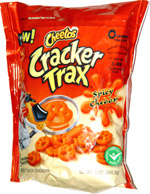 Taste test: This new snack from Chester Cheetah's kitchen appeared to be Frito-Lay's attempt to compete against the popular Cheez-Its line of snack crackers. Each piece was shaped like Chester's paw print, with one large hole for the paw and four smaller holes for his fingertips. The whole exterior was coated with a bright orange cheese seasoning.

Upon biting in, we found that the inner cracker was just a plain cracker, without cheese infused into the dough (as Cheez-Its do). So it seems that Cheez-Its' strategy is to put the cheese into the cracker, while Chester decided to put his cheese onto the cracker. Most of our tasters were impressed by how heavy the bag was, as these were a very dense snack, giving quite a bit of heft to a relatively small bag.

Many people were skeptical of these and didn't have a whole lot of good things to say about them at first, but many of those same people also ended up eating quite a few Cracker Trax and later warmed to the taste somewhat. Each piece had a more solid feel and better crunch than Cheez-Its, as they were not hollow inside. They had about the same amount of cheese taste as Cheez-Its at first, but far less in the aftertaste. At first, I didn't think these tasted any different then the (non-spicy) Cheddar version, but after eating quite a few of these, I could definitely feel a hot aftertaste in my throat.

This snack was discovered by Bev at Market Basket. Review published April 2008.