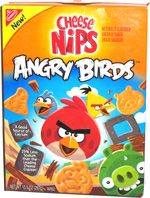 Taste test: This version of Cheese Nips had shapes to match the heads of the various Angry Birds characters (who all seem to be just heads).

In addition to the outer shapes, there were also indentations to represent eyes, mouths, eyebrows and hair. So the characters were quite recognizable to anyone who has spent way too many hours playing Angry Birds. In addition to those features needed to match the characters, there were several small holes in each piece, which I'm assuming were necessary for the baking process, but unfortunately they detracted from the illusion of matching the characters. These holes were more prominent on the actual crackers than in those pictured on the box. They made a good effort to minimize the distraction of the holes by making some of them correspond to facial features such as eyeballs and nostrils, but other holes did not, so the appearance just wasn't as nice as it would have been without the holes. As for taste, the crackers tasted quite good, with a similar taste to Cheez-Its, maybe a bit less intense in their cheesiness, but they still worked well to satisfy a cheese craving.

From the package: “A Good Source of Calcium” ... “25% Less Sodium than the Leading Cheese Cracker”