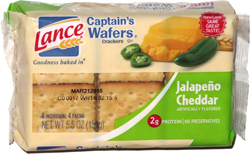 The square crackers had a pattern of holes and a salmon-colored filling that spilled out the edges in places and showed through the holes.

I crunched in to find a nice crumbly feel to the crackers, with a soft filling that had a mild cheddar and jalapeño flavor. There was some heat, but not lots of it, and a mild aftertaste, also just slightly hot. Pretty good.

This snack was discovered by Jeremy at Market Basket. Review published February 2015.