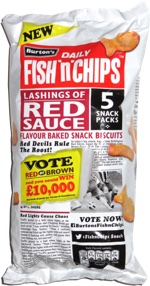 Taste test: This big package contained five single-serving packs of snacks in two shapes — fish (clearly) and chips (I suppose). The fish ones were a bit bigger than Goldfish. The "chips" were sort of wave-shaped, which doesn't generally match how I think of chips/fries, but the wave shape does work well with the fish theme.

I bit in to find a soft cracker crunch with a slightly tangy tomato flavor. The package described it as "red sauce" in one place and "tomato ketchup" in another. I liked the taste a lot, but it didn't say "ketchup" to me. That didn't stop me from eating two of the five bags right in a row!

Smell test: Not the standard ketchup smell — sweeter, and tangy in a different way.