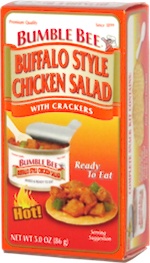 Taste test: This box contained a 2.5-oz. can of Buffalo tuna, a bag of five smallish, round crackers and an adorable little baby plastic spoon — but kind of an odd one, because it was completely flat, not scoop-shaped, with a small lip around the top edge. It turned out to be more food than I thought it would be from the size of the box.

The chicken salad started with more of a pickled taste than I would expect from Buffalo chicken, but that's fairly typical for this type of ready-to-eat, shelf-stable salad. It had some chunks of green something that were apparently celery, as shown in the picture on the box, but it all looked much mushier in person. In the end, it was fairly hot with some spices, but still not a typical Buffalo chicken, not nearly as good as the StarKist Buffalo chicken (which came in a packet instead of a can and provided no crackers).

The amount of chicken salad lined up well with the number of crackers, allowing a generous amount of salad on all five of them.

Smell test: Slightly pickled, on top of the spicy chicken.

From the package: “Ready to Eat” ... “Hot!” ... “Refrigerate canned product in separate container after opening.”

This snack was discovered by Jeremy at Dollar General. Review published December 2020.