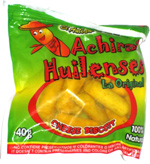 Taste test: These roughly tube-shaped snacks were yellow on the outside and looked fairly dense, at least compared to similarly shaped cheese puffs. The tubes were a bit over half an inch in diameter.

I crunched into the first one to find that the inside was solid, with kind of a cracker-like crunch, though far thicker than any normal cracker would be. It had a mild cheese taste that was just OK, as it didn't taste bad, but it just wasn't quite the kind of cheese that I like.