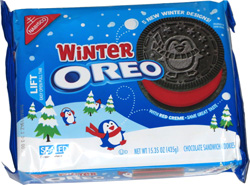 Taste test: The very day before we heard the first of the hype surrounding the upcoming Red Velvet version of Oreos, we spotted this red-filled version at our local supermarket. The package promised that same taste as original Oreos, and there was no mention of velvet of any kind. Instead, it promised five different winter-themed designs.

We opened the package to find that the filling was a fairly dark red, with a little hint of purple in it. The designs — featuring a snowman head with top hat and scarf, a penguin (also with scarf!), mittens, a snowflake and the words the words "SNOW DAY!" — were very nice. The opposite side of each sandwich had the standard Oreo designs. What does red have to do with winter? We have no idea. The penguins pictured on the package were wearing red scarves (just like real penguins) so maybe that's it. As for taste, the red filling did indeed taste the same as regular Oreo white filling. Good stuff.

From the package: “With red creme • Same great taste”