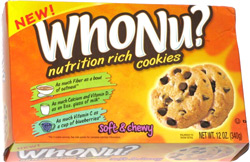 Taste test: These chocolate chip cookies made a number of nutritional claims on the box, but we'll let others evaluate the nutrition, and we'll just focus on whether we liked eating the cookies.

(They also make an Oreo-like version that makes the same nutritional claims.) I opened the cardboard box to find a plastic tray wrapped in a resealable wrapper (so the outer box seemed like a waste of packaging). The cookies were just under 2 inches in diameter and were quite a bit darker than the ones pictured on the box. I could tell just from feeling them that they were quite moist, and they tended to stick together. They also felt moist upon biting in, as they had a pretty good chewy feel. They weren't the best packaged chocolate chip cookies in the world, but they were not bad at all. Most of our tasters thought they were about the same as Chips Ahoy. All those nutritional additives apparently didn't take away anything from the taste or texture.

This snack was discovered by Jeremy at Market Basket. Review published May 2011.