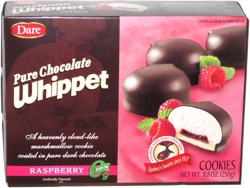 Taste test: This box contained a tray holding 14 chocolate-covered marshmallows (oddly arranged in three rows of five, four and five). The formula was much like the original Whippet, with a crumbly cookie on the bottom, a big marshmallow area on top and a dark chocolate coating on the outside. The major change was the addition of a thin raspberry jelly layer between the cookie and the marshmallow. They looked good from the outside, with an interesting shape and a nice smooth chocolate exterior.

I liked the taste, though not quite as much as the non-raspberry version. I just don't think berries and chocolate are a great combination, but there was still plenty of chocolate and marshmallow, with a nice melty feel after biting in.

One sad note: Between the time we reviewed the original and this one, they reduced the number of cookies from 15 to 14.

Smell test: An OK raspberry and chocolate smell. Not my favorite combination.

From the package: “A heavenly cloud-like marshmallow cookie coated in pure dark chocolate”

This snack was discovered by Laura D'Onofrio. Review published September 2016.