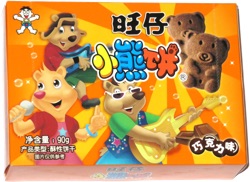 Taste test: This box had a convenient peel-open top, much easier than your conventional cardboard snack box, and opening it revealed a foil bag with the Want-Want kid logo repeated (but hard to notice because of the yellow ink used). I opened the bag to find small, bear-shaped cookies with a fairly dark brown color. The cookies all appeared to be made with uniform shapes, the same smiling bear depicted on the box, but most of them were a bit scuffed up, and some were broken.

I poured myself some cold milk and crunched in to some cookies to find a very soft crunch and a mild chocolate flavor, marginally recognizable as chocolate and not really enough to provide much of a chocolate rush. A nice bears-in-a-band box design, but otherwise nothing special here.

This snack was discovered at Super 88, Malden. Review published .