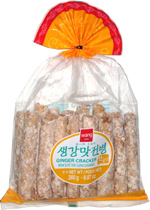 Taste test: This clear bag contained rolled snacks that looked kind of like wafer sticks, but even more like hollow taquitos, with a light beige color underneath an uneven whitish coating. I say more taquitos than wafers because the dough was thick and rolled to just two layers, rather than thinner, brittler and in many layers like wafer sticks. Also, each piece was about 4 inches long and a bit under an inch in diameter, while most wafers are longer and thinner.

When I first tried to crunch in, the roll felt fairly solid, but once I got that first bite, it did have a nice crumbly texture, like a cookie. The white stuff on the outside turned out to be some sugary icing. The taste was generally like ginger cookies, but the icing was the twist here, giving it more sweetness. Both the taste and texture were very good.

I shared the rest of the bag with many folks at an art exhibit opening, and aside from a few who don't like ginger and wouldn't even try one, everyone else thought they were great.

Smell test: Kind of like ginger snaps, but very mild.