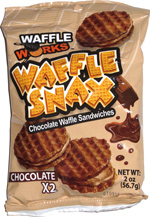 Taste test: These round(ish) waffles, based the same design that Waffle Works used for the Nacho and Maple Cinnamon flavors, promised a chocolate waffle and a chocolate filling. The actual waffles in the bag had shapes that were only very roughly round, and some of the sandwiches were misaligned, so they didn't closely resemble the carefully cut sandwiches pictured on the bag.

I crunched in to find a nice crunch, very crispy and light, but there wasn't all that much chocolate flavor initially. A richer chocolate flavor kicked in shortly after that as the filling hit the tongue, which would explain the X2, and that was very nice as a chocolate delivery system. Tasty, crunchy and good.

From the package: “We've crafted these little sandwiches two times the chocolate – our rich chocolaty waffles and a creamy chocolate filling!”

This snack was discovered by Jeremy at Dollar Tree. Review published August 2015.