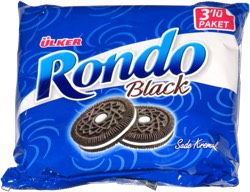 Taste test: When I see the name "Rondo," the first thing that comes to mind is basketball player Rajon Rondo. The next thing is Rondo's Sub Shop in Boston. These cookies from Turkey used the same word, but they had nothing to do with basketball and just a little to do with meat-filled sandwiches. They were Oreo-like sandwich cookies.

The cookies resembled Oreos, but there were a few differences and oddities. Each sandwich was a bit smaller than an Oreo, as the round cookies had a slightly smaller diameter. Unlike Oreos, the top and bottom pieces were not identical; both had a pattern that looked like something created by a Spirograph, but one side had a hole in the middle, allowing the white creme filling to spill through.

I bit in to find that they had a crunch that was slightly less brittle than Oreos, and the taste of the cookies and creme was similar but different. The chocolate seemed less intense, but still, pretty good cookies.

The major oddity was one particular thing about the packaging. The main package contained three separate packages, each holding four stacks of two sandwiches, arranged lengthwise. The odd part: The packets were taped together, which was very unusual. So after opening the main package, there was some awkwardness in removing the first packet, as it didn't just pull out, but rather I had to peel off two pieces of tape connecting it to the next one. Same deal between the second and third packs. Weird.

Smell test: Very mild, not as strong of a chocolate smell as Oreos.

This snack was discovered by Jeremy at Baza Market, Newton, Massachusetts. Review published .