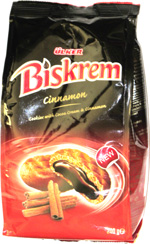 Taste test: These round cookies had a pattern of diamonds on the tops and flat bottoms, with a butter cookie exterior enclosing filling in the center.

A bit into the cookie revealed filling was a mix of chocolate creme and cinnamon, with a color that fell somewhere between milk chocolate dark chocolate. The actual cookies hardly resembled the picture on the bag, as it vastly exaggerated the amount of filling. The picture made it look like the filling dominated the cookies, but really it was a fairly minor part of the interior. The discrepancy aside, the amount of filling was not a problem, as the cookies tasted quite good and had plenty of tasty, zesty creme filling to balance the sweet, crunchy cookies. The cinnamon dominated the chocolate by adding lots of cinnamon zing to it. Our snackers enjoyed eating these, and many people gave a thumbs-up.

This snack was discovered by Jeremy at Baza Market, Newton, Massachusetts. Review published .