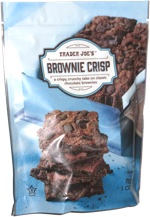 Taste test: I've been a big fan of Brownie Brittle for several years. When I spotted this snack at Trader Joe's, it appeared to be their version of the same idea, so it seemed worth a try.

I opened the bag to find that most of the pieces had squarish shapes (a contrast to the irregular Brownie Brittle shapes), with chocolate chips jutting out from one side of each, though not quite the density of chips pictured on the bag. I crunched in to find that the pieces were thicker than Brownie Brittle and the texture was also different, with a less crisp crunch, though still a crunch. The taste was intensely chocolatey, but even with a glass of cold milk, I didn't enjoy it as much as Brownie Brittle. Meh.

Smell test: Wow, really smells like a tray of brownies right out of the oven.

From the package: “a crisp, crunchy take on classic chocolate brownies”