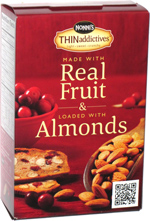 Taste test: This box contained six 100-calories packs of what were described by the manufacturer as cookies, but each pack's clear wrapper revealed three cake-like slices whose cross-sections had lots of exposed cranberries and almonds.

Each piece was cut thin at about an eight of an inch, about three inches wide, with a dome top maxing out at about an inch and half high. Our snackers were curious to try these, and everyone who took a slice (or even half a slice) enjoyed the taste. The feel was crunchy, though not a very hard crunch. The pieces were somewhat brittle and not at all bendable, and brittleness showed in the presentation, as many of the slices had broken apart into multiple pieces. The taste was nicely sweet, with a good hint of cinnamon, with plenty of sweetness from the cranberry pieces as well, without being anywhere near too sweet. There was also a strong hit of almond, especially in the aftertaste. We shared the 100-calorie packs around, and most of our snackers ate just one slice, or even a partial slice, and liked it. So maybe not quite "addictive" but still satisfying.

From the package: “Made with real fruit & loaded with almonds” ... “light • sweet • crunchy”