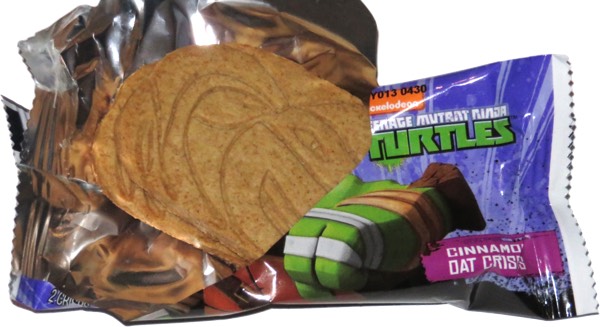 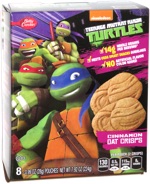 Taste test: This box contained eight separate packets, each containing two cookies — and even one cookie was quite substantial. All of the cookies had the same shape, depicting a Ninja Turtle's face and blindfold. I don't know much about the Teenage Mutant Ninja Turtles (never seen the movies), but I do know that there are four of them, so having just one design seemed a bit lame. The cookies were fairly large and quite thick.

I bit in to find that they were very crunchy. The taste was pretty good, with a mildly sweet cinnamon flavor, but the feel was a bit gritty, as is typical of oatmeal snacks. We shared them around with some snackers, and most people liked them, but a few gave a thumbs-down to the taste.

This snack was discovered by Jeremy at Market Basket. Review published November 2016.