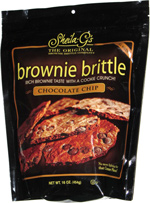 Taste test: This was one of those snacks that I never knew existed, yet as soon as I saw the words Brownie Brittle, I was compelled to buy a bag. Inside the resealable bag were randomly shaped, thin, flat pieces with a fairly dark brownie-like color (much darker than it looks in the picture on the bag), highlighted by even darker chocolate chips.

The texture was entirely different from peanut brittle, as it was much less dense. The "brittle" name turned out to be a better fit for this than it ever was for peanut brittle, because this stuff was, in fact, brittle. The feel was crisp and crunchy, while not being at all hard like peanut brittle, so you won't need any muscle to break this apart or bite in. And it was fabulous. Great texture, great taste, great crunch. Our snackers were unanimous in instantly becoming big fans after one bite.

From the package: “Rich brownie taste with a cookie crunch!” ... “No more fighting for that Corner Piece!” ... “All natural” ... “Like many brownie aficionados, Sheila is particularly fond of the crispy edges. In fact, on many an afternoon she would walk through the bakery gathering the brittle batter off the edges of the sheet pans as the brownies cooled in their racks. That started her wondering: How could she create a whole pan of crunchy edges? Well, lucky for us, she figured it out!”

This snack was discovered by Jeremy at Costco. Review published January 2013.