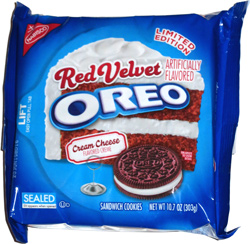 Taste test: This limited-edition version of Oreos broke the usual Oreo formula in several ways, the most of significant of which was that the cookies were not the nearly-black regular Oreo ones, nor the beige Golden Oreo ones. You'd expect them to be red then, right? Well, they only very slightly red, if at all — they were basically brown, and a fairly dark brown at that. Whether I could see any red at all seemed to depend on the lighting. I probably wouldn't have noticed the red if I weren't actively looking for it.

Another big change was that the package promised Cream Cheese creme, which sounds redundant, but presumably means different from regular Oreo creme. Come to think of it, regular Oreos are reputed to be vegan, and actual cream cheese obviously isn't. So we checked the package, and there was nothing in the ingredients that jumped out as dairy, nor was dairy listed in the allergens section. However, the Kosher symbol included a D, so we're figuring that there was indeed something potentially dairy in there. Sorry vegans!

The other change was actually the first thing that I spotted when I found this in the supermarket's Oreo department: The package looked quite a bit smaller than all of the other flavors on the shelf. The front said it was 10.7 oz (303g). We opened it to find that there were just 22 sandwiches in all, with the three rows of cookies (8, 7 and 7) lined up horizontally across the package rather than the usual four vertical rows. The small package (at full price) was disappointing to our Oreo fans, who tend to eat however many Oreos are put in front of them.

The creme looked white, and it also looked maybe a hint thicker than regular Oreo creme. We crunched in to find that the sandwiches did taste like cake with frosting. The creme was definitely different, with a sharp, cream cheese-like flavor, but it was hard to tell if the cookies alone tasted much different. All in all, I like the original Oreos better, but there was nothing too bad about these.