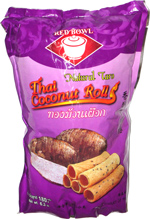 All three kinds were quite good, but we had a hard time making sense of the different flavors, as they seemed quite irrelevant to the snack — they all tasted pretty much the same. The tubes had a feel and taste similar to an ice cream cone (specially, a sugar cone), except a bit more brittle. We could taste some coconut but not a lot. We ate these many months after the other two flavors, so we're at a bit of a disadvantage as far as spotting slight differences. But if there were any differences in taste, that's what they were: slight. Our snackers liked these a lot and ate their way through all of the tubes in the bag pretty quickly.

This snack was discovered by Bob Whoppererererer. Review published September 2014.