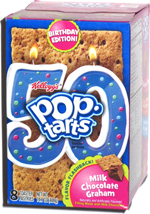 Taste test: This version of Pop-Tarts had an unusual exterior, with a soft, crumbly texture and no frosting. I took the two Pop-Tarts from one packet and toasted one, then placed both on a plate. When I ate the toasted one, it had the feel of a graham cracker with a filling of fudge. That surprised me, as just expected a graham type of flavor on a Pop-Tart, and it never occurred to me that it was supposed to feel like an actual graham cracker. That they pulled this off was impressive.

The taste was much different than your typical Pop-Tart — even much different than the various chocolate ones — but it was pretty good. The fudge filling didn't get all that close to the edges, so while most of it was tasty, edge bites were kind of bland.

Speaking of bland, when I tried the untoasted one, it still didn't seem like a Pop-Tart — but it didn't seem like a graham cracker either. It felt like some sort of very soft pastry, very crumbly, or maybe like an oatmeal cookie, except without any oatmeal taste. And it was not nearly as tasty and the warmed-up version. Hot or cold, both preparation methods made for an unusual Pop-Tart.

From the package: “Good Source of 6 Vitamins & Minerals” ... “Filling Made with Milk Chocolate”