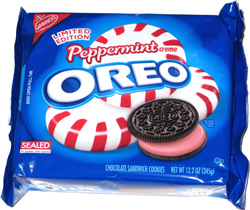 Taste test: This limited-edition flavor of Oreos put a mint filling between two Oreo chocolate cookies with the usual design, and when we offered them to some snackers, everyone was thrilled to grab one to try. The Oreo folks didn't attempt to create the red-and-white stripes that many peppermint snacks have, nor did they do a filling split between red and white (which would similar to other split-filling Oreo flavors such as Candy Corn, Caramel Apple and Reese's), opting instead for just a uniform pinkish filling.

Everyone who ate one was glad that they did. People generally couldn't notice much difference in taste between this and the non-limited-edition green Mint Oreo, but that's a good thing, because we really liked those too. We also noticed that the cookies had the same better-than-normal-Oreo crispness as the green mint ones. Great!

This snack was discovered by Jeremy at Market Basket. Review published December 2014.