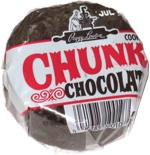 Taste test: These cookies generally followed the same form factor as Peggy Lawton's regular Choco-Chip Cookies, with three 3-inch diameter cookies in the clear wrapper, but the major difference here was that the dough had the same color as the chocolate chips. In fact, the chocolate chips were so well camouflaged that it was hard to find them to determine whether they were as abundant here as they were in other ones, but they seemed to be noticeably less numerous.

The bigger surprise than that, however, was that there were chocolate chips at all rather than chocolate chunks, as the name of the product had me expecting bigger chunks, but they seemed instead to be the same chips as the other ones. Good cookies, delivering lots of chocolate (and also making lots of dark-colored crumbs). Cold milk was an essential with this one.