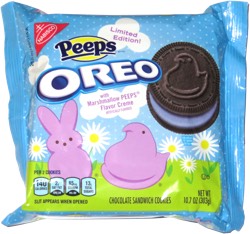 Taste test: This follow-up to last year's original Peeps Oreo gets more effort points than the original, as they didn't use just the standard Oreo cookie designs, instead presenting a new Peeps-themed design for one side of each sandwich while keeping the standard Oreo markings on the other. The package showed a sandwich with a chicken-shaped Peeps design, but there were actually two different designs inside, as half the cookies depicted a Peeps bunny surrounded by butterflies.

For tasting purposes, the bigger change here was that instead of using Golden Oreo cookies, they used the more conventional chocolate ones. The filling was a light lavender color, a bit less garish than the bright pink in the other ones. I crunched in to find that the taste was pretty good, with a mild sweet fruitiness added to the usual chocolate Oreo taste. It didn't go as far down the marshmallow Peeps flavor direction as the other one, but it was a nice taste that still allowed the Oreo chocolate to shine.

Smell test: Nice, a hint of fruitiness added to the original Oreo smell.

This snack was discovered by Jeremy at Fry's. Review published March 2018.