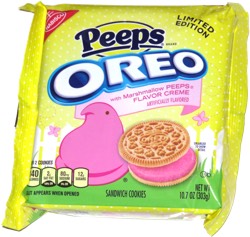 Taste test: This version of Oreos was rather shocking, based on the looks of the package alone — it pushed the design envelope far more than the other Oreo limited editions, so much so that when I first saw it online, I assumed it was just another fake Internet Oreo flavor. But oh, it was for real.

For each sandwich, they took two Golden Oreo cookies and put a bright purplish pink Peeps filling in between. I crunched in to my first sandwich to find lots of sweetness, as the filling tasted remotely like a Peeps marshmallow, except Oreo filling is far denser than Peeps. The sweetness stayed around for an extra-sweet aftertaste. Not as marshmallowy as I had hoped, but also not as bad as I had feared!