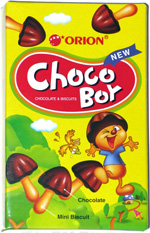 Taste test: These chocolate cookies confused me quite a bit. When I first saw the box, I assumed the cookies were supposed to look like mushrooms, as each each was constructed from a cookie stick (the mushroom stem) dipped into milk chocolate (the top of the mushroom). This would make them much like Meiji's Chocorooms, don't try to hide from their mushroom shape. But for this kind, Orion chose Choco Boy as their name, with a mascot on the box of a boy for whom the top of the mushroom becomes his hair. (The boy even has a zany bird as a sidekick, for some reason.) So were these not supposed to look mushrooms, but like a boy with a bowl cut? I dunno. In terms of the mascot, it gets stranger, because the foil bag inside the box also features a boy, but it's a different boy (though he does have the same haircut), with several views of the boy dancing and jumping, but no pictures of the actual cookies, nor a sidekick.

All of that intrigue aside, these were really good cookies, just like the Chocorooms. The cookie stems allowed me to pick up each piece without getting chocolate on my fingers, and they also added some nice crunch. The milk chocolate was rich and tasty. Most of the pieces had the mushroom stems inserted at odd angles, so they didn't look as much like mushrooms as they did in the picture. 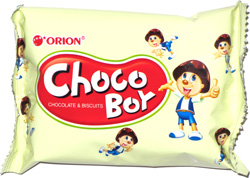 From the package: “Have fun with your friend Choco Boy!”

This snack was discovered by Jeremy at H Mart, Cambridge/Burlington, Massachusetts. Review published May 2012.