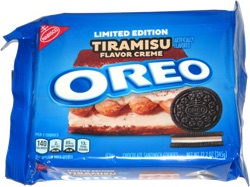 Taste test: This limited-edition Oreo wasn't the first tiramisu-flavored one we found, as there was a Tiramisu flavor from Japan two years ago. But this was really a much different product, with full-thickness cookies instead of Thins and two layers of creme — one white, one beige — instead of just a beige layer.

I peeled open the package to find that, much like the 3-layer Red, White & Blue Oreo, the two layers were considerably messier in reality than in the immaculate sandwich pictured on the container. Although the sandwich was much more substantial than the Japanese version, the taste was much the same, with lots of coffee flavor to go along with the chocolate, leaving the overall taste quite different from a plain Oreo.