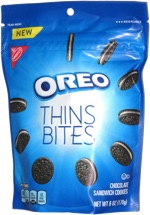 Taste test: This version of Oreos stood apart from the other three "Thins Bites" products in lacking a fudge coating. So it was just a reduced-thickness, reduced-diameter Oreo with no change in flavor or extra coating. Thanks to the lack of a coating, I was able to measure the size of the cookies (15/16-inch in diameter), plus I could see the cookies' surface pattern (a downscaled and slightly modified version of the standard Oreo markings).

Besides the reduced diameter, the major difference between these and the Oreos Thins was that instead of being carefully arranged in a tray, they were just thrown together in a bag. That didn't affect the taste — they tasted just like regular Oreos — but it did result in many of the tiny sandwiches being dinged or scuffed up to a far greater degree than their tray-arranged compatriots. The Nutrition Facts defined one serving as 13 sandwiches, which seems like a lot, but they were small, so I suppose you could eat 13 of them in rapid succession without even realizing it.