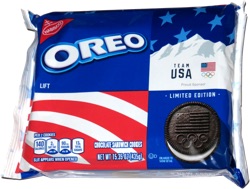 Taste test: With the rapid acceleration in the number of limited-edition Oreos recently, we've seen lots of new flavors but precious few changes in cookie design. That drought has finally ended, as this package featured Oreos with the standard markings on one side of each sandwich and an assortment of five Olympic-themed designs on the other. Designs included a cross-country skier; a figure skater; a ski jumper; the American flag and the Olympic rings; and a crest surrounding the words "Team USA."

The package was not identified as Double Stuf, but the fillings of these sandwiches sure looked thicker than usual. They tasted just like regular Oreos, or at least Double Stuf ones. Whoever eats the most packages of these in one sitting should get a gold medal!

This snack was discovered by Jeremy at Shaw's. Review published .