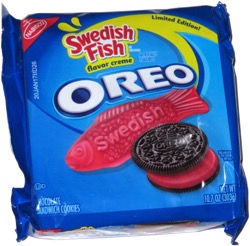 Taste test: Oreo flavors just keep getting weirder! (We're talking Fruity Pebbles, Blueberry Pie and Pumpkin Spice weird.) But when we heard about this one based on Swedish Fish, we expected one of the weirdest.

The round sandwich cookies had the usual Oreo markings on the outsides, but the filling was dark red, slightly purplish. I crunched in to find that the filling really did taste like Swedish Fish. It had the usual Oreo creme texture, but it didn't bring any Oreo creme taste that I could notice into the mix, as it was a strong, sweet, fruity taste. The chocolate cookies were clearly there, but I could hardly taste the chocolate at all. It was indeed weird to have an Oreo taste like a Swedish Fish, but it really was not bad.

A few oddities about the package: It contained three rows of sandwiches, but they were uneven, with eight, seven and nine per row. But I can't complain much, as the Nutrition Facts promised "About 10" servings of two cookies each, so 24 cookies was a considerable bonus. The package's listed weight was 10.7 oz., marking a return to the smallest-ever size for limited-edition Oreos, whose size has shrunk considerably over the years. (See the 60+ kinds of Oreos we've reviewed for more.)

Smell test: Smells like Swedish Fish (the gummy, not the fish)! Apparently the filling was strong enough that we couldn't smell the chocolate cookies at all.

From the package: “Contains: Wheat, Soy.”

This snack was discovered by Jeremy at ebay. Review published August 2016.