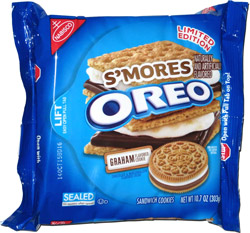 Taste test: It looked like this Oreo flavor got some extra attention from the Oreos product development folks, as there were several innovations beyond the usual for special-edition Oreos. 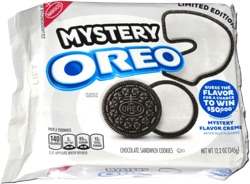 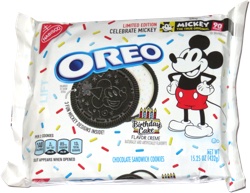 The chocolate and marshmallow filling was done differently from other dual-filling special editions, such as Cotton Candy, Caramel Apple and Candy Corn, as those kinds split the filing area between the two colors, while allowing each one to be the full thickness of the filling. This one instead put two layers within the filling. However, it was not evenly split between the marshmallow and chocolate like the cookie pictured on the front of the box; the relative thickness of each layer varied quite a bit within each sandwich, as you can see in our close-up photo.

The cookies were very light in color, not quite the same color as Golden Oreos, with the standard Oreo surface designs.

I bit in to find a nice crunch and good flavor, with definitely the taste of graham crackers and some Oreo creme — but unfortunately, not the taste of s'mores. I opened up one of the cookies to investigate the creme. When I licked some of the white part, it didn't taste like marshmallows; it just tasted like regular Oreo creme. And really I could not taste much chocolate either.

Smell test: Not really like s'mores. Can smell the graham cracker, but not any marshmallow or chocolate.

This snack was discovered by Matt Gagnon at Shaw's. Review published .