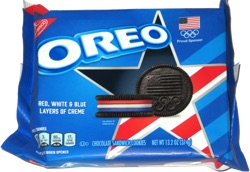 Taste test: This version of Oreos promised three layers of creme filling, with the all-American colors. The sandwich pictured on the package set an expectation of how that should look — smooth, perfectly even layers, each full visible across the profile of the sandwich. But when we opened the package, the look was quite different. In most cases, the layers were quite uneven, and you had to look very closely to see all three colors. The blue layer was darker than shown, as it was almost a navy blue.

Each cookie had one outer face with the standard Oreos design, while the opposite side varied between two designs, one showing the words "Team USA" surrounded by a crest, and the other, the American flag atop the Olympic rings. (Evidently, this product's release was tied to the 2020 Summer Olympics, which it turns out aren't scheduled to happen until 2021.) Oddly, the flag shown on both the cookies and the packaging had just 13 stars (and not in the pattern of the historic 13-star flag), though it did have the correct number of stripes, 13.

There were 21 sandwiches in the package, and the three creme layers in each one added up to a good helping of creme. They seemed to have more of it than Double Stuff but still far less than The Most Stuf. The taste was pretty close to the Double Stuff ones.