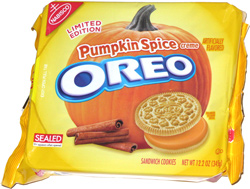 Taste test: This special version of Oreos had two blonde Oreo cookies enclosing a dark orange filling, with the standard Oreo markings on the outsides of the sandwich. We crunched in to find that they were really good, with the standard Oreo texture and a great pumpkin pie taste. The feel of the creme was slightly gritty, but not really in a bad way — it wasn't anything like a smooth pumpkin pie filling, but it was about as gritty as your normal Oreo creme. Every one of our snackers who tried these loved them. Oreo folks, please don't make these just a limited-time flavor!

One thing we noticed when the cookies were still in the box was that the sandwiches didn't look like they were solidly held together. It was trivial to pull one of the cookies off, and when we did, it came off cleanly, with all of the orange creme on one side. That's different from standard Oreos, which typically give some resistance when you pull them apart and usually leave at least some creme on each side. It does make things easier for those who want to build their own double-stuffed Pumpkin Spice Oreo sandwiches!

This snack was discovered by Jeremy at Market Basket. Review published September 2014.