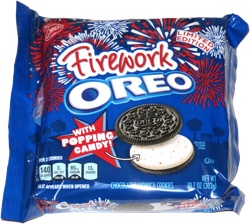 Taste test: We've eaten a lot of buzzworthy limited-edition Oreo flavors, but this one seemed to generate even more interest than most, promising to include Pop Rocks-like exploding candies within the chocolate-and-creme cookie sandwiches. They looked like regular Oreos, except that the white creme filling included some small red and blue bits, presumably the source of the fireworks.

I crunched in to find a typical Oreos taste and crunch, with no Pop Rocks sensation initially. After that, I felt some light explosions in the far reaches of my mouth. Not particularly intense, far less so than eating a handful of Pop Rocks, and actually less intense than eve the crunch of the cookies, plus less intense than the explosions in some candy bars that had a similar gimmick.

When I ate some more sandwiches later — out of general hunger, and less focused on gauging how prominent the popping was for the purposes of this review — the popping actually seemed more noticeable, though still quite subdued.

To isolate the source of the popping, I tried eating a separated cookie without filling. There was no popping, so the Pop Rocks did indeed reside in the filling, not the cookies.

From the package: “With popping candy!” .... “Limited edition”

This snack was discovered by Jeremy at Market Basket. Review published May 2017.